Dr Leon Daniels, B.Sc., Ph.D., Chairman of the Board of Pangolin, stated: “We are very pleased with Pangolin’s success to date, as we have now graduated from an explorer to a discoverer and are determined to continue on this course.”

The 45 mantle-derived indicator garnets, inclusive of some high pressure garnets previously announced on March 26, 2013, were liberated from a core sample in Magi-01/1 taken at a depth of 22 meters below the surface. A split of the available core will now be processed through a mini-Dense Media Separation Plant to recover any additional kimberlite indicator minerals, such as garnets, and/or macro diamonds from the kimberlite intersected section.

Based on these positive results, two additional diamond drill holes intersecting at least 100 meters of kimberlite will be drilled on the Magi-01 kimberlite for kimberlite indicator mineral and microdiamond recovery. The Company has also elevated additional previously identified kimberlite targets in the project area to targets of high immediate interest with similar magnetic signatures to Magi-01/1.

The photos below compare the various kimberlite crater facies sediments (A1, A2) and RVK breccias (B1, B2) from Pangolin’s core drill hole Magi-01/1 (to the left) versus those from drill hole M1/50 from the M1 Kimberlite Pipe (to the right). 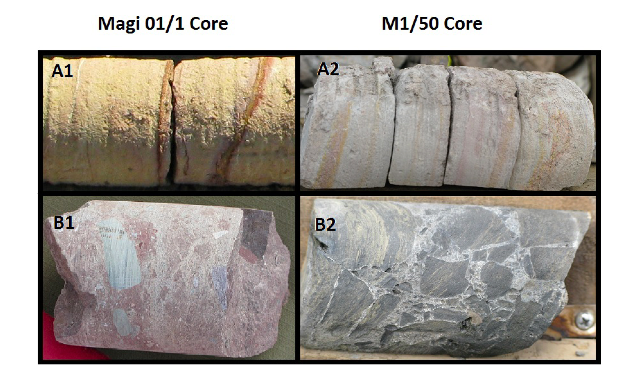 About the Tsabong North Project

The Tsabong North Project, located approximately 100 km north of the town of Tsabong in south-western Botswana, is 1,545 km2 in size. It is comprised of anomalous concentrations of kimberlite indicators and has large geo-botanical features. Pangolin has already identified more than 50 drill-ready aeromagnetic targets in the Project area, several of which have surface areas exceeding 20 hectares. Exploration activities in the area are guided in part by the recommendations of a National Instrument 43-101 Technical Report prepared for the Project.

The Tsabong North Project is situated on the Archaean Kaapvaal Craton, immediately north of the diamondiferous Tsabong kimberlite field that hosts the M1 Kimberlite, the largest known diamondiferous kimberlite pipe in the world (www.firestonediamonds.com). Pangolin’s Chairman, Dr. Leon Daniels, was part of the Falconbridge Team that developed the geological model of the 180 hectare M1 Kimberlite that was discovered in 1978. He was also directly involved in the discovery of several new kimberlites in the Tsabong kimberlite field.

Pangolin’s soil sampling has produced highly anomalous concentrations of kimberlite indicators within the Tsabong North Project area. Microprobe analyses of indicator minerals have confirmed the presence of G10 garnets, indicating the presence of a mantle conducive to the crystallization of diamonds. A number of indicators occur, including remnants of kelyphite that indicate close proximity to kimberlite. Enzyme-leach trace element results are consistent with orientation trace element results over known kimberlites near the Project.

Pangolin Diamonds Corp. is building a leading diamond exploration and development company in the heart of Botswana, the world’s leading diamond producing country by value. The Company is the 100% owner of 11 Prospecting Licenses covering 5,307 km2, including the Tsabong North, Jwaneng South, Malatswae and Mmadinare Projects. Pangolin’s management and team leaders have over 90 years of combined diamond exploration experience in southern Africa. This makes the Company the most experienced diamond explorer in Botswana other than De Beers Exploration and Debswana. The Company is equipped for exploration, with two diamond drill rigs and a fully portable one-tonne per hour Dense Media Separation Plant used to prepare samples and make diamond concentrates. Pangolin is well-funded to continue its exploration programs for the next year.

The technical disclosure in this news release has been reviewed and approved by Dr. Leon Daniels, Ph.D., Member of AIG, Chairman of the Board of Pangolin, and a Qualified Person under National Instrument 43-101 rules.

For more information regarding Pangolin Diamonds Corp, please refer to:

Neither the TSXV nor its Regulation Services Provider (as that term is defined in the policies of the TSXV) accepts responsibility for the adequacy or accuracy of this release.

Looking for something special?

Not sure what you’re looking for? Start here…

The latest from Pangolin